It’s been another busy month in the CentOS project. Here’s some of the highlights from around the community.

On October 18th, we had the historic news that project lead and long-term Board of Directors member Karanbir “KB” Singh will resign from the Board, effective immediately.

If you’ve been around CentOS for any time at all, you’ve heard of KB, and his work with the community. It’s safe to say that without KB, the project would not be where it is now. He’s been a voice of leadership in the project since the very beginning, and has always been a presence on our lists, at our events, and in our governance.

We wish KB well in his future endeavors and hope to still see him around CentOS, and the larger Linux ecosystem, for years to come.

KB’s departure is also a vote of confidence in the recently added directors, and faith that they will continue to lead the project in the right direction, even as we shift focus to Stream and stronger SIGs.

Watch the centos-devel mailing list over the coming week for information about how, and when, we will select the replacement director for the seat that KB is vacating.

Our friends at Fedora will release Fedora Linux 35 today, November 2nd. We encourage you to download it and try it out. Fedora is the upstream of CentOS, and a great choice for your daily Linux needs.

CentOS Stream keeps getting more useful all the time.

On Friday, Fabian announced the availability of the centos plus repository for 8-stream, which returns to a feature that we used to have, but had become unmaintained over the past years. You can enable it with sudo dnf install centos-release-plus -y. More details are in the mailing list post linked above.

October Board of Director Minutes

The October Board of Directors meeting was held on October 13th. As usual, the minutes of that meeting are published on the CentOS blog.

The next meeting will be held on November 10th. Watch the centos-devel mailing list for your invitation to attend that meeting.

On October 7th and 8th, we ran our the final CentOS Dojo of 2021, which was held online. We had good turnout, and great presentations. All the videos, and most of the slides, are now available on the event wiki page.

We started with an AMA (Ask Me Anything) with the Board of Directors, with topics ranging across many topics, and about half of our directors able to participate.

Special Interest Groups (SIGs) are smaller groups within the CentOS community that focus on a small set of issues, in order to either create awareness or to focus on development along a specific topic.

Each month, several of our SIGs report about what they’ve been working in the past quarter.

During this period, RDO Xena was released in the Cloud SIG based on a new version of OpenStack. This version is currently available for CentOS Stream 8. More details can be found in the announcement post.

During this quarter, Cloud SIG has made good progress to get OpenStack running on CentOS Stream 9:

Cloud SIG has finished migrating all their jobs from the shared jenkins instance (ci.centos.org) to a new private instance running in the CentOS CI OpenShift environment.

Unfortunately, the former co-chair Paul Isaacs has ceased his activity in the SIG. Candidacies for replacement are welcome!

The NFV SIG has published their report to the CentOS blog.

The Promo SIG also published their report to the CentOS blog.

For the OpenStack use-case:

Provide a unique source for messaging related packages. These packages
are consumed e.g by the Cloud SIG or the OpsTools SIG.

If you prefer your news in video format, we continue to publish a monthly video summary. The October edition is on our YouTube channel.

We’ve also posted two videos that help visualize the relationship between Fedora, CentOS Stream, and RHEL. The first video discusses what CentOS Stream is and the second talks about how contributions flow through CentOS Stream to RHEL. There’s also a diagram that discusses how it all fits together. 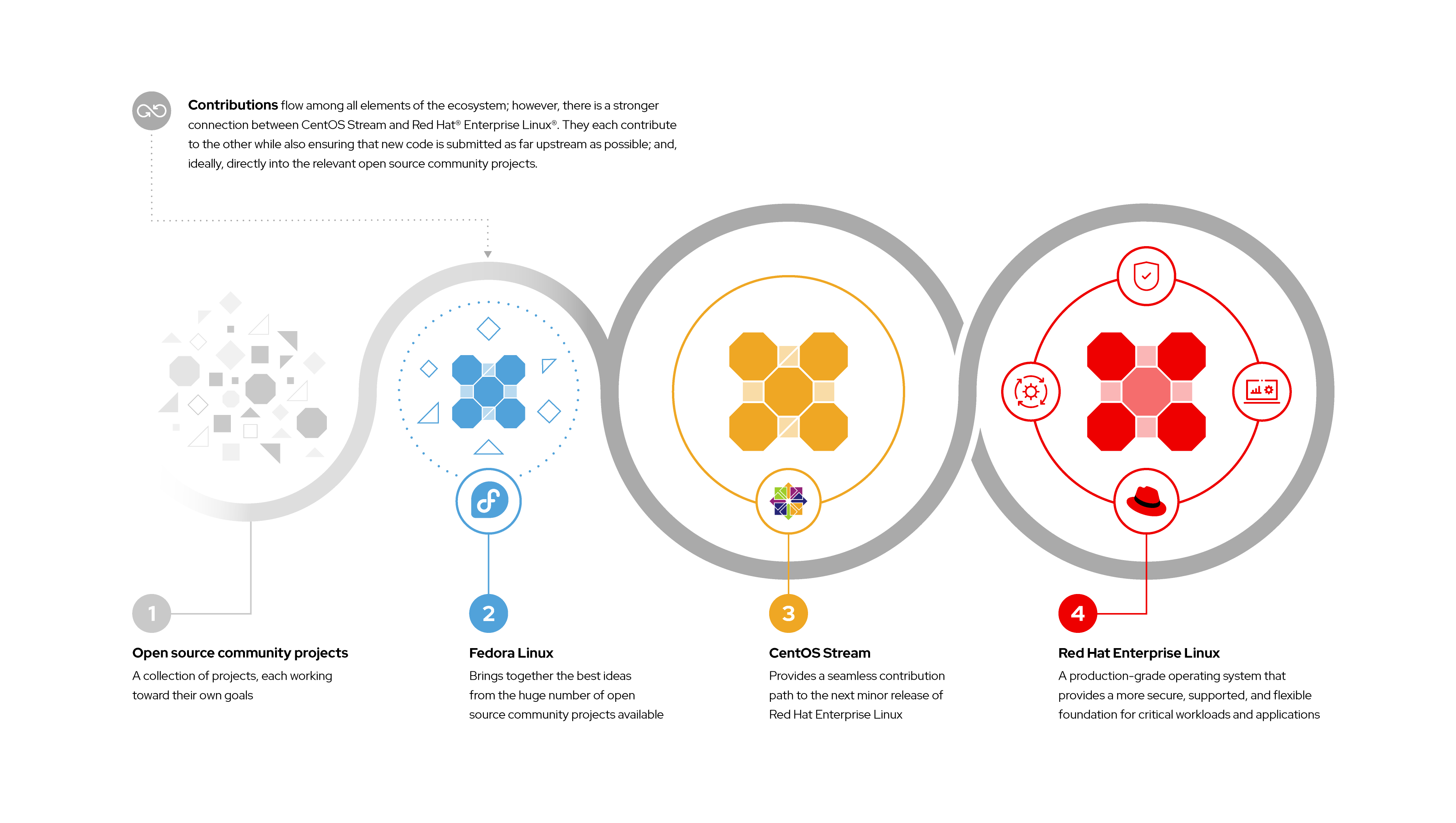 From the larger EL (Enterprise Linux) ecosystem, you’ll no doubt be interested to see the AlmaLinux project’s announcement of the ELevate tool which allows an in-place upgrade from any EL7 distribution to EL8 distributions.

Thanks for reading another newsletter. There's lots of places to connect with the CentOS community. Come talk to us on our mailing lists, our IRC channels, and our forums. And follow us on Twitter for daily news and updates.