If you'd like to help out with the process of putting together the newsletter, please see the Contributing section at the end. We're always looking for help!

The big news in September was the release of CentOS Linux 8, along with CentOS Stream. CentOS Linux 8 is exactly what you expected - a rebuild of Red Hat Enterprise Linux (RHEL) 8 - but CentOS Stream is a new aspect of the CentOS Project that needs a little more explanation. 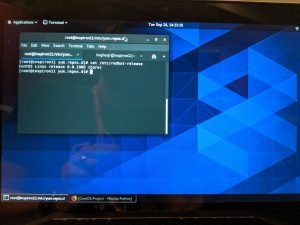 CentOS Stream is a rolling preview of what will be in the next minor release of RHEL. CentOS Stream will be updated regularly (the exact cadence is still a work in progress) and will give you the opportunity to verify your code and workloads against what’s coming next.

If you’re interested in building a project on Stream, we encourage you to look into the SIGs - https://wiki.centos.org/SpecialInterestGroup - which are a place to package and test on CentOS, using the Community Build System (CBS) and the CentOS CI. Bring your ideas to the centos-devel mailing list, and we’ll help you figure out the way forward.

Finally, note that this is still a work in progress. We hope to have regular updates to CentOS Stream within the next few months, but tooling for that does not exist yet, and so there will be a lot of manual processes at first. We appreciate your patience while we get things up and running.

We are working on a feedback mechanism that is going to evolve over time. CentOS Stream must have the ability to get feedback and suggestions to be successful. We will announce details as things solidify.

We issued the following CEEA (CentOS Errata and Enhancements Advisories) during September:

We issued the following CESA (CentOS Errata and Security Advisories) during September:

We issued the following CEBA (CentOS Errata and Bugfix Advisories) during September: 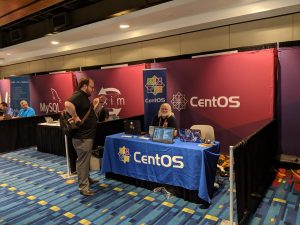 In September, we had a presence at the Webpros Summit (formerly the cPanel conference) in Atlanta, Georgia. The cPanel community are long-term supporters of CentOS, so this is always a fun event. It was also a great place for some early conversations about CentOS Stream as a place to develop and test products. 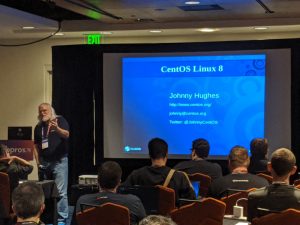 While there, Johnny Hughes gave an excellent presentation about the CentOS Linux 8 release, what's in it, and why it was a longer process than usual.

As usual, there's a number of events coming up where you can find members of the CentOS community.

October 28–30, in Portland, we'll be at LISA19, the\premier conference for operations professionals, where we share real-world knowledge about designing, building, securing, and maintaining the critical systems of our interconnected world. Come see us at the Red Hat booth with your CentOS questions and stories.

Then, in November, we'll be in Denver at SC19 - the international conference for high performance computing, networking, storage and analysis. Once again, come see us at the Red Hat booth. As usual, or main interest there is the always-awesome Student Cluster Competition, where tomorrow's HPC experts compete to build a supercomputer with off-the-shelf hardware and open source software ... and most of them choose CentOS. Supercomputing is #PoweredByCentOS!

Finally, I want to keep reminding you that we'll be doing another Dojo at FOSDEM, on January 31st 2020. Details will be coming soon to the CentOS Wiki. Think about what you might want to present about, and be sure to join us in Brussels!