As in most years, May was extremely busy.

The Status of CentOS 8

We'll start with the question that appears to be on everyone's mind.

As you may know by this point, on May 7th, at Red Hat Summit, Red Hat announced the release of Red Hat Enterprise Linux (RHEL) 8. You can read the full announcement on the Red Hat Developer Blog.

Since CentOS is a rebuild of RHEL, you can expect that the release of RHEL 8 will lead to the release of CentOS 8. And, of course, the most frequent question we received at Red Hat Summit, in the CentOS booth, was "when is CentOS 8 coming out?"

We don't have a definitive answer to this, because, especially with a new major release, there can be unforeseen complications. However, historically, a RHEL release is typically followed by the CentOS release within one or two months, so you can probably expect that general timeline.

We've also put up a wiki page that will track the day-to-day status of the rebuild effort. We ask that you follow that page, rather than asking on the mailing list for daily updates, and we will endeavor to keep that page current with daily changes in status.

In May at the annual Red Hat Summit in Boston, Red Hat announced the general availability of Red Hat Enterprise Linux 8. This, in turn, triggered the start of the process to build CentOS 8. This is discussed in more detail in the news item above.

We issued the following CEEA (CentOS Errata and Enhancements Advisories) during May:

We issued the following CESA (CentOS Errata and Security Advisories) during May:

We issued the following CEBA (CentOS Errata and Bugfix Advisories) during May:

The following announcements also happened during May:

SIGs - Special Interest Groups - are where people work on the stuff that runs on top of CentOS. We have recently started having SIGs report quarterly, so we have just a few of them each month, getting through the entire list every 3 months.

We have the following SIG reports this month:

provide tools and, documentation, recommendations and best practices
for operators of large infrastructure.

The past state still continues, we are not attracting new contributors.

CentOS opstools packages are being consumed by OpenStack Kolla, and
at the same time, for example also by oVirt.

For the future, we are removing messaging-related packages over
to the CentOS messaging SIG.

Issues for the Board

None at this point, but we should keep an eye on contributors.

In recent months, the Scientific Linux project announced that they would discontinue their work and move to CentOS 8 for the future. As a result, there are discussions happening about forming a Scientific SIG to continue their work under the CentOS umbrella. You should see more about this on the centos-devel mailing list in the coming weeks. 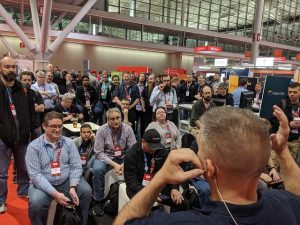 As we've mentioned in the past two newsletters, in April we had the CentOS Dojo at Oak Ridge National Labs, Tennessee. I'll bring it up one last time to mention that the videos from the event - the full presentations, and interviews with several of the presenters - are now on our YouTube channel. There's a great presentation from John Turner, talking about what work ORNL does with their supercomputers (running CentOS and RHEL!), and that's a good place to start.

Then, in May, many CentOS community members congregated at Red Hat Summit in Boston. After the RHEL 8 release was announced, Jim Perrin addressed a crowd of people who had questions about what changes are coming for CentOS 8. Questions ranged from timing (addressed elsewhere in this newsletter) to questions about issues raised in the recent post on the Red Hat blog about experimenting with newer functionality in CentOS before it hits RHEL. We're looking forward to the coming year, and how you, our users, will be able to contribute to this process. We also want to hear your thoughts on what this future might look like.

There are still a number of events coming up this year where you can meet and interact with the CentOS community.

I'd particularly like to highlight, again, the CentOS Dojo at DevConf.US in Boston, August 18th. We now have a tentative schedule, but there's probably room for another presentation or two, if you're going to be in the area and have something to share. Based on feedback last year, we've added a lightning talks section, where you can give 5-10 minute presentations on what you've been working on. And we'll have Jim Perrin talking about what's happening around CentOS 8, which will presumably be released by that time. We hope to see you there!

If you're interested in hosting a Dojo at your organization or business, please get in touch with me, at rbowen@centosproject.org, with your proposed event.